You Probably Need To Be Spending More On Overhead

For decades now there has been a belief that the lower the ratio of non-profit’s overhead expenses to program expense, the better run the non-profit is.  As a result, a low overhead ratio has been viewed as something of a virtue and non-profit organizations have used all sorts of accounting tricks and parsed terminology in an effort to  redefine what constitutes an overhead expense. Likewise, funders have rewarded non-profits who can exhibit low overhead expense ratios or they disallow the use of funding for overhead altogether. This has created what many have termed a starvation cycle.

A couple of public administration researchers recently conducted a study in an attempt to discern what sort of expense ratio non-profits actually need to be successful. Looking at data from 22,328 U.S. cultural groups, mainly performing arts entities and museums, collected between 2008-2018, they found a ratio of 30%-35% is actually required.

As we explained in the academic journal Nonprofit and Voluntary Sector Quarterly, we found that when arts nonprofits devoted 35% of their budget to overhead, they fared best in terms of attendance. 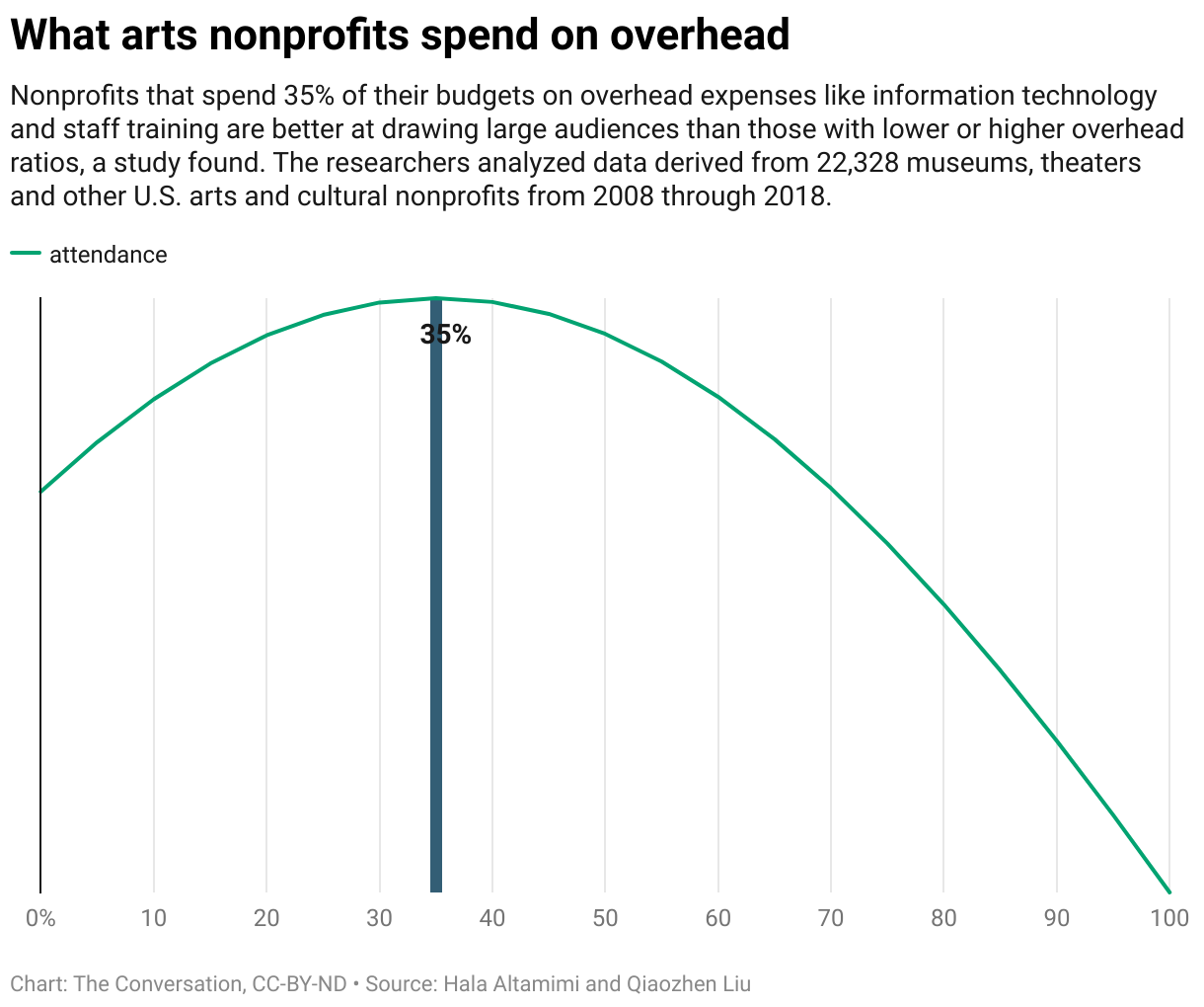 If you are like me, this data and resulting guidance comes as a surprise. Especially after working to keep costs to bare bones. But as the authors say, the bare bones approach ends up damaging the organization in the long run.

In response, nonprofits feel pressured to meet those expectations to attract funding. They may then spend too little on overhead by paying low and noncompetitive salaries, replacing paid staff with volunteers and using outdated facilities and equipment. Alternatively, they may distort the way they report on their expenditures to satisfy their donors’ demands.

Either response can feed donors’ unrealistic assumptions, creating a cycle that slowly but steadily starves nonprofits and weakens their infrastructure.

Ultimately though, they warn against the creation of any sort of facile rule of thumb about an expense ratio that is broadly applied. Just as groups serving the homeless differ from arts and culture groups, there are factors which make every cultural organization different.

But while the data analysis suggests that arts nonprofits hit the sweet spot by spending a bit more than one-third of their budget on these costs, we are not trying to recommend a new benchmark for overhead spending in the sector.

That’s because optimal overhead levels vary depending on several factors. For example, programs that charge admission may have to spend more on overhead than free programs to attract an audience.