In other posts here on ArtsHacker, we covered how contracts should be viewed as part of a communication process, preferably one of the final steps. Because the contract memorializes what has been discussed, it is important that the communication process be conducted in a clear and open manner.

One of the recurring topics of discussion among artists, agents and presenters is the issues that crop up when people are trying to act in good faith and give the other party the benefit of the doubt, only to have a detrimental outcome.

I wanted to provide a quick primer about ethical conduct and clarity of communication when arranging for an engagement. Just to be clear, this applies to you if you enter in contracts for a whole season of events or just single appearances to speak or perform with an ensemble. 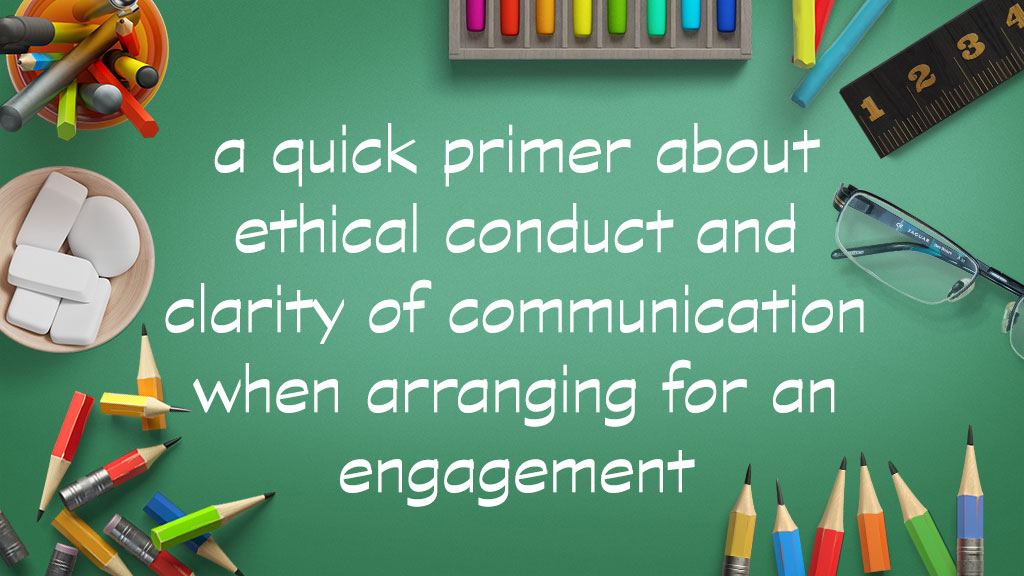 As mentioned in a previous post, the organization known as the North American Performing Arts Managers and Agents (NAPAMA) has established codes of ethics applying to different parties and situations in which they interact.

The section I want to focus on today is the Manager-Presenter Relations:

Each of these are important or they wouldn’t be included in the code of ethics. However the ones in bold are often the most problematic when making arrangements for a person or group to appear.

Essentially what happens when a particular date or week is discussed, at least one party in the conversation will start to make plans based around that date. The assumption is that the conversation will progress toward a contract unless the conditions and degree of investment the other party has in the engagement is clearly communicated.

If you have a date in mind, but need to run it past others for decision, state that fact along with a date on which you expect to follow up. If an engagement is dependent upon funding, make the conditions and timing of those factors clear as well. If you are aware of the possibility of a more lucrative opportunity presenting itself, that should be communicated. If you are only 50% sure things will move to contract, make that clear from the outset so the other parties can entertain other options.

If you have even a 50% degree of confidence hold on a date and you find it won’t work out, communicate that you are relinquishing all claim on the date rather than leaving the other person to wonder.

One of the worst practices I have heard of is a group that asked for contracts from 10 groups and then the committee met to choose one among them. This was primarily the result of amateur organizations not realizing the significance of asking for a contract, but that was little consolation to the 9 group who thought they had commitments for a date only to lose it.

This just reinforces the need to emphasize that contracting should be one of the last steps in the process rather than the first.

There is also the issue of Reliance that could have a practice like asking for multiple contracts (or making definitive statements of commitment) result in legal action. In another post I wrote about Reliance as factor to be aware of when entering a contract.

The definition of Reliance is:

Note that the definition says “statement of alleged fact, claim or promise.” It doesn’t necessarily need to be written into a contract.

If an agent has organized a whole tour or regional leg of a tour around your involvement and you pull out putting 6-10 other dates in jeopardy, (it doesn’t have to be that many), then they would have a greater claim of reliance damages against you than if the performer flew from home and back to perform just for you.

By the same token, if you built your season, series of events or festival around the promise of a specific star attraction, you have a claim of reliance if they pulled out.

Now the best course in such cases is to clearly communicate that one’s plans revolve around the other party’s participation prior to reaching the contracting stage so that the other party both knows this is the case and can communicate any issues they may foresee.