DISCOUNTING: Be Proactive, Be Selective, Be Timely 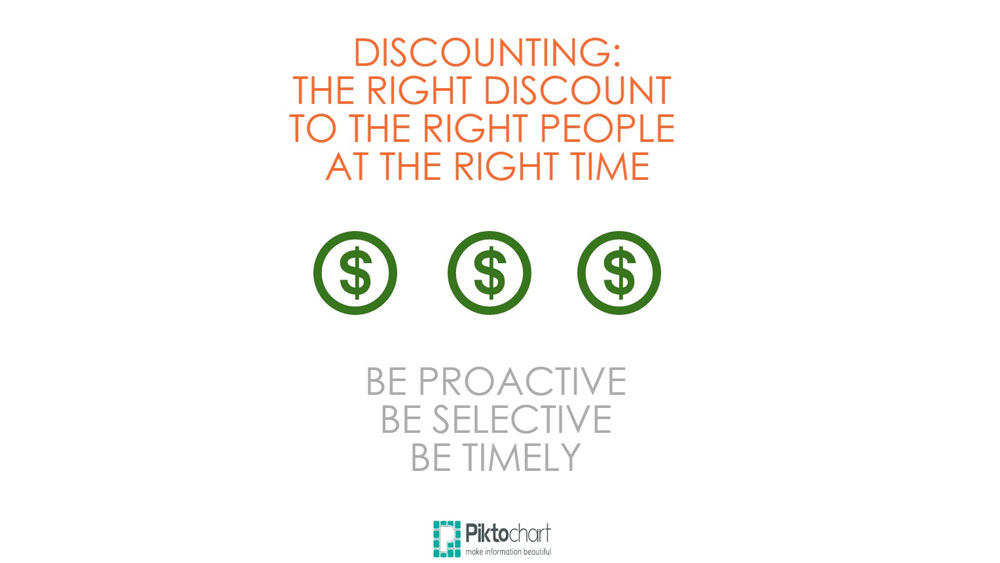 Discounting can be a fabulous way of increasing audiences when done effectively and strategically. By offering discounts, you can bring in new patrons to your hall, reactivate patrons who haven’t attended in several years, or even help fill a concert that may not be expected to sell so well. Discounting should not be used as a panic button, however. Think strategically before you even begin your concert marketing to know what discounts you may want to offer, to whom, and when. You need to be prepared to offer the right discount to the right person at the right time. Let’s discuss first how not to use discounts.

What not to do…

Imagine you’re two weeks out from a concert and it’s not selling so well (we’ve all been there, don’t deny it!). So you decide to offer a BOGO discount via your email blast. While this isn’t the best way to discount (being reactive instead of proactive), I can see why many arts organizations will do this. You feel pressure to have a full-looking house. But what if all of your concerts are slow-selling? What then? I came across an organization where almost every Masterworks concert had a Buy One Get One Free offer emailed the week before in order to fill the hall. Compounding the issue was that the market was known for being a VERY last minute town. By offering a BOGO the final week, the organization was, in essence, discounting half of their ticket sales, based on previous ticketing trends (that 50% of the total tickets were sold the week of).

Discounting this way created an audience that waited until the last minute to get the ‘deal.’ It’s hard to say whether the BOGO offers actually brought in new people or just gave the discount to regular ticket buyers who were planning on coming anyway and would have paid full price. The takeaway is that consistently offering a BOGO offer for EVERY concert to EVERYONE during the final week has a damaging effect to your bottom line.

So how do you do it?

EARLY BIRD:The key is to offer discounts strategically and to specific segments, not just a blanket offer. For our holiday concert weekend, I offer ticket buyers from the previous five years of holiday concerts the chance to get 10% off IF they purchase by October 31. I give them a small incentive to buy early as opposed to waiting for the last minute. We’ve seen some great traction with this early offer. We do not offer any last minute discounts to this high-selling concert weekend. We have actually had several people say to us in the past, “Well, I’ll just wait until you send a discount offer,” or “I’ll just wait to buy until you drop the prices.” We politely explain to them that we would not be sending a last minute offer and they should buy their tickets well in advance to get the best seats. We even implemented demand-based pricing on our popular Saturday night concert. In 2013, we had the highest revenue-generating weekend for our holiday concerts by using this early discount strategy and only selling full price (and demand-based priced) tickets nearer the concert. By offering the 10% discount in October, paired with an earlier start on concert promotion, we were able to reverse a long-standing trend of people waiting to purchase until the last minute. When they realized that no discount was coming in the final weeks, many purchased at full price.
DAILY DEAL SITES?: There have been several articles written on the use of daily deal sites such as Groupon, Living Social, Travelzoo, and more. I have used them in the past, and used them quite effectively to fill several concerts in a brand new series. However, a big issue with using these daily deal sites is the difficulty in getting the patron information from purchasers into your database. Most daily deal sites will not share this information (at least in my past experiences), and most of the deal buyers are asked to opt-in in order for you to even market to them via their email address. Many don’t opt-in. While it is possible to get some of this data when patrons cash in their voucher, many wait until the day of the concert, making it impossible to capture their personal data in the final rush before the concert. If it’s not possible to remarket to them, then you can’t effectively build an audience using this discount method. You also can’t expect to generate a significant amount of revenue from these deals. From my previous experience, your ‘deal’ needs to be at least a 50% discount off your regular price, and you only get half of that returned to you, as the deal site keeps the other half. In essence, you’re getting only 25% of the original value of the ticket and very little patron data. I would use these sites with caution and be sure to read the fine print on any contracts.
LIST TRADES: Another idea of effective discounting is by using list trades from other area arts organizations. This can be tricky if you are in a market where arts organizations hold their patron data under lock and key. I am here to tell you that the more arts events a patron attends in your market, the better it is for your own organization. Why wouldn’t you want to do a list trade with the theater company or the chamber group or the art museum? These are people that are already culturally aware arts attenders in your community. They just may not be attending your particular arts genre. By doing a list trade, you can provide a direct mail offer of a small discount for those arts attendees to try out your art form. I’ve seen it work many times. Cities that have a collaborative spirit among arts groups and those that have a joint database have seen great results, myself included.
72-HOUR SALE: I pull this out of my pocket every few years when I think our single ticket sales need a push. I have used a similar sale in all three orchestras that I’ve worked in with varying results, almost always positive. The premise is this: for 72 Hours, all single ticket sales are discounted. I choose a price point that is just a few dollars below the average ticket price, so patrons feel like they’re getting a deal, but you’re not severely lowering your per cap. As for timing, I have typically done this sale in January or February – mid-year to get the second half of the season fired up. I did this sale recently in Chattanooga, and had our Masterworks and Pops Series tickets discounted to $27 each (our average ticket price hovers around $30-$35) and $17 for our Chamber and Volkswagen Series (these tickets average $25-28). The goal is to get new-to-file ticketbuyers to try you out, plus encourage multi-ticket buying behavior (i.e. these tickets are so cheap we can afford to go to two concerts!) We sold over 1000 tickets in three days to a total of almost 300 households, of which 34% bought more than one concert and 27% were new-to-file. As for promotion, try to get as much as you can for free, but we paid for and dropped a direct mail piece, bought some radio, and used a ton of social media and email marketing. All in all, we spent about $3,000 to make over $26,000. That’s an 11% cost-of-sale for single tickets. Not bad at all!

To recap, the key is to be proactive in your discount planning and don’t wait until the last minute to throw out a discount, hoping to fill the hall with people who may have purchased at full price. Be selective in who you offer a discount to, such as a group of people who you want to start seeing in your hall and might need a push to get there (young people, other arts attendees, etc.). Be timely by using discounts to spur sales early and start building demand instead of offering a fire sale a week out, which may show desperation and make it appear that your product isn’t worth paying full price.