Let’s Cut Right To The Chase: Go Update Your PC To Windows 10. But Before You Do…

For the first time in a (very) long time, Microsoft released a version of its Windows operating system (OS) that’s not only a substantive improvement but a genuine treat to use. It’s free for current Win7, Win8, and Win8.1 users and the actual upgrade process is perhaps the least problematic in Microsoft’s entire history of Windows OS updates. Having said that, here are a few items you need to do before jumping into things.

There’s a big difference between making sure hardware and its respective Win10 drivers are ready for the upgrade. Drivers are the bits of code that allow those pieces of hardware to interface with the OS; in short, you may see that the pre-update check performed by Microsoft clears your computer’s hardware, but that doesn’t necessarily mean the drivers are ready.

Fortunately, avoiding any unpleasant surprises is a straightforward process:

If you come up empty-handed, try contacting the computer and/or device manufacturer to inquire about driver status. Worst case scenario is they won’t have a scheduled Win10 compatible update for several or more weeks but better to know this in advance than find out after the fact. 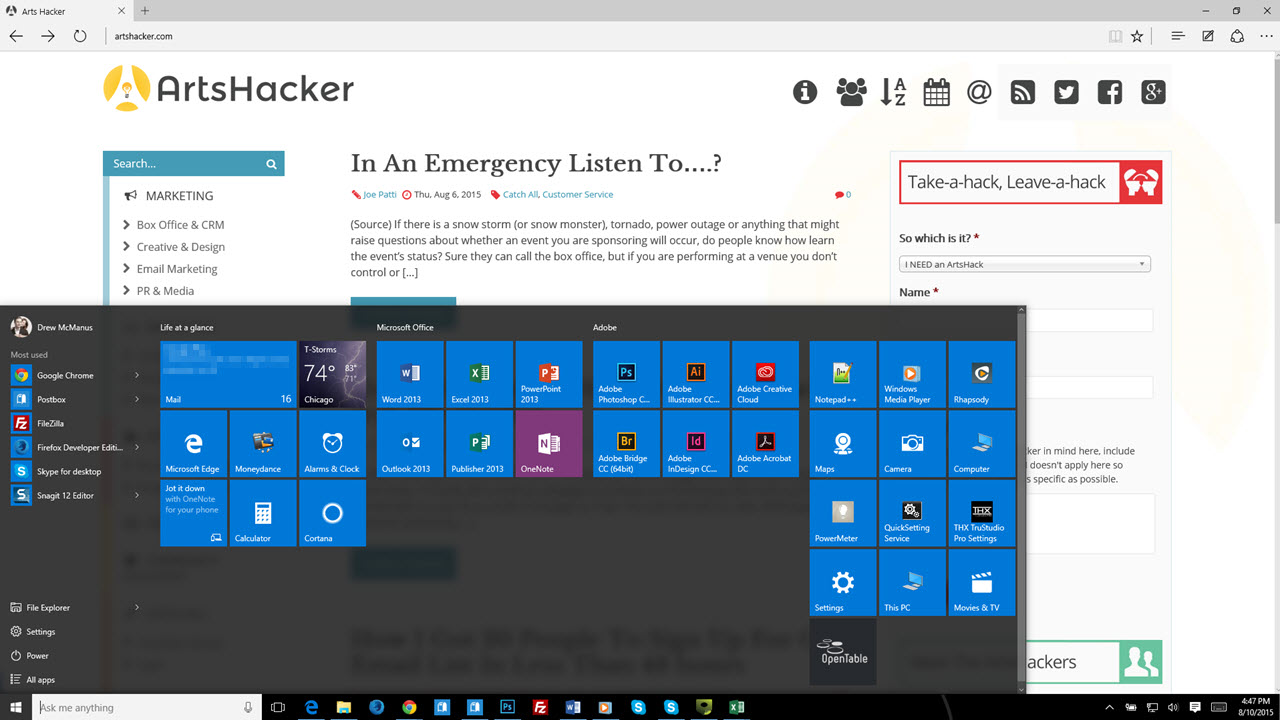 Once you get Win10 in place, you’re going to lose whatever you had set up in your Win7, Win8, or Win 8.1 start menu (decidedly a good thing for the latter two) but don’t let that shake you. You should either make a list of the programs you know you want to include in the new Win10 menu or take a screencap (tip: use your phone to take a picture of the screen).

Fortunately, setting up Win10’s start menu is both straightforward and intuitive; for Win7 users, you’re in for a real treat as it’s going to feel very familiar but offer much more flexibility to customize the look and feel of material you want to display.

If you’re a habitual tablet or smartphone user, you’re going to appreciate how easy it is to create shortcuts to specific website URLs into the start menu. For arts administrators that access any one of a number of niche cloud based services, you’ll have a very easy time setting those up and grouping them as desired.

Get Ready For The Awesome That Is Cortana

Granted, this isn’t really necessary before upgrading to Win10 but if you need any additional encouragement to go through the process, then know that Cortana, Microsoft’s virtual personal assistant, is a genuine game changer.

Apple’s Siri was the first commercially accepted virtual assistant but Microsoft ups the ante by integrating Cortana into the OS is ways you simply haven’t seen before. Cortana really shines when you use the voice activated commands but no worries, even if you don’t have a microphone built into your PC, it is still integrated into traditional typed command interfaces.

To that end, Eric Ravenscraft published an excellent article at Lifehacker.com that covers all of the amazing things you ask (or type) Cortana to do. Personally, the reminder with alarm function has been a day-saver on a few occasions already. Being able to obtain word definitions or ask what time it is in Saskatoon (you laugh but they don’t follow DST so the joke is on you) are all terribly useful perks.

Although Win10 is a free upgrade, that doesn’t mean Microsoft is pushing it out en masse. Instead, they took a thinking person’s approach and decided to roll in out in waves so as to prevent server overload and customer frustrated (cough, cough…iOS upgrade bottlenecks…cough, cough).

And even though Microsoft has made it through most of the queue, you may be one of the final groups still waiting for a notice that it’s your turn. But waiting is for chumps and Microsoft actually provides a way to force the upgrade download via a special tool they provide via a dedicated Win10 download page. I used this tool without a bit of trouble but if you are the least bit uncomfortable with manually engaging the process, you should probably wait your turn in the master queue.

1 thought on “Let’s Cut Right To The Chase: Go Update Your PC To Windows 10. But Before You Do…”