May Be Best Not To Suggest A Donation

Wed, May 3, 17Thu, May 4, 17 By: Joe Patti Development, Legal
FacebookLinkedInPrintCopyEmail

You may have heard about the lawsuit against the Metropolitan Museum of Art whose signs recommending $25 admission fee was seen as obfuscating the fact you can pay what you want.  The museum has changed their signs to replace “recommended” with “suggested.” (Though recently they have petitioned NYC for permission to charge admission to people who reside outside the city.)

However, the widespread practice by arts and cultural organizations of using the term “suggested” can be quite problematic. The For Purpose Law blog recently noted the sticky situation non-profit groups can create when they employ the term “Suggested Donation” for admission to an event.

As far as the IRS is concerned:

An offer of merchandise, or admission to an event like a concert or a luncheon, is what it is – something of value to the recipient and not a charitable gift – no matter what language is inserted on the receipt or ticket stub.

…if there is any “quid pro quo,” then there is no charitable deduction at all, except in the case that a sale or ticket price is deliberately set higher than the fair market value of the benefit received by the person making the payment. In the latter situation, a portion of the price paid may be tax-deductible.

It is the responsibility of the tax-exempt organization to: (1) make the determination of the fair market value of the benefit received and (2) inform the taxpayer-buyer that either the price of admission or of the merchandise is the standard price for that type of event or product

Most people know that in order for something to be a tax deductible donation, the amount given needs to be in excess of the value of service or good.

It is easy to overlook this when you decide to use “suggested donation” in order to create an appeal for an event that wouldn’t exist if the price were perceived as an admission fee. If you have budgeted an event at $25/person and suggested the same as a donation and someone asks for a letter recognizing that donation, you can’t provide one because the food/concert/merchandise has already been valued at $25.

You might be able to rationalize a lower cost for a concert because it doesn’t have a clear material price like food and merchandise does. However, you then have to decide the entire concert was being offered for free and the organization was prepared to absorb the entire cost. Parsing it any other way, say $15 for expenses and $10 donation, means you need to tell your patron you lied when you promoted the payment as a $25 donation.

Now the easy way around this is to take Metropolitan Museum of Art approach and say it is suggested admission instead of donation. Of course, you loose the resonance with people’s charitable nature.

In addition to admissions, you will often see a box or jar on the table at an open reception suggesting a donation with a subtext of helping defray the cost of food and wine being provided for free.  Organizations without an alcohol licenses can’t sell it. It is nice to have wine at these events, but it does cost something. 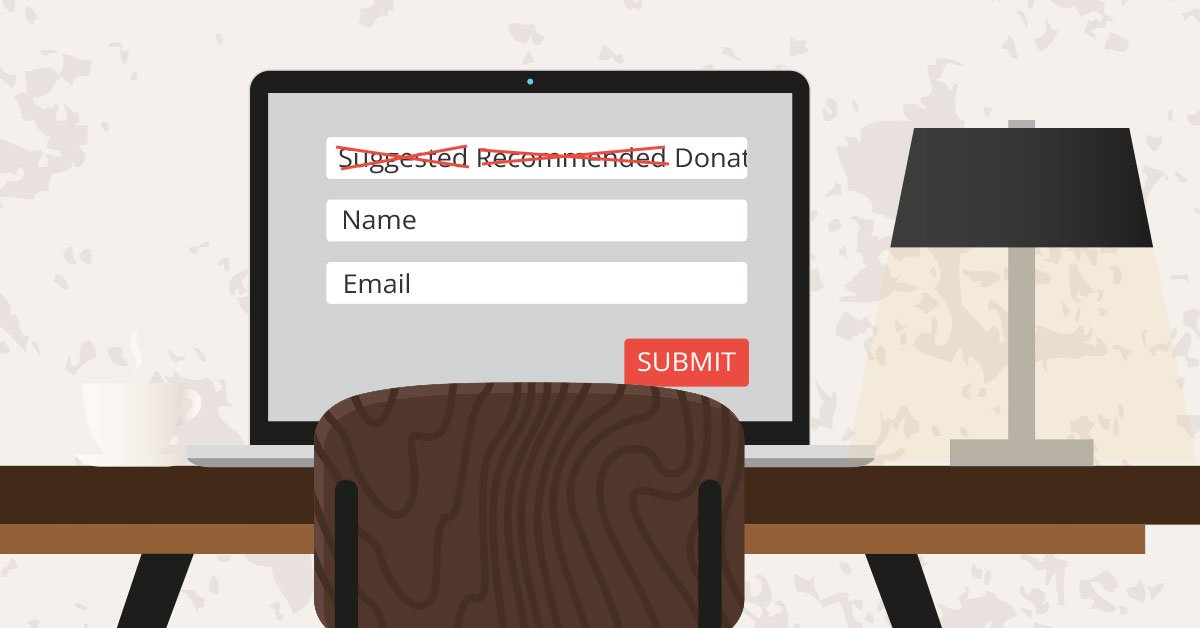 In all likelihood, no one is going to ask for an acknowledgement for $5-$10 they throw into the jar. But if they did, even if you are offering the food for free, without concern for receiving any donations, if the person has consumed anything, they have received value so it isn’t a donation.

Since “Suggested Reimbursement” and “Help Us Defray the Cost of the Food,” is a little unwieldy, probably the most succinct term to use would be “Suggested Tip.” It may not be the most apt, but thanks to the proliferation of tip jars at every coffee house across the land, it is familiar and generally socially acceptable.  Though if anyone has a better idea, we would love it hear it.

I should note, when it comes to things like concerts, as far as the IRS is concerned, if the donation you solicit for the event approximates the price the artist customarily sets for their concert, no part of what the purchaser paid is deductible. So for my earlier concert example, if a group usually charges $25 for a concert, you can’t charge $25 and say the show is valued at $15 and $10 is donation.  The value people received during your fundraising concert is the same as people receive at non-fundraising concerts by the same group.

For Purpose Law links to a useful IRS publication that addresses some of the possible scenarios, including the one I just mentioned about the concert. While it can’t exhaustively cover all permutations non-profits can come up with, it does address many of the common practices. For example, if a person pays $50 for a fundraising raffle ticket to win a car/vacation, etc, that amount is not a deductible donation to the organization.

2 thoughts on “May Be Best Not To Suggest A Donation”