When it comes to paying touring performers, there are all sorts of deal that can be made. The payment terms on those deals can get pretty confusing. There are a number of resources available online that explain these agreements. One of the best I have found is a blog post on the site Making It With Chris G.

Chris Goyzueta addresses a number of common deal structures and creates a YouTube video running through how each example is figured out. The numbers and examples are somewhat geared toward musicians playing smaller theaters, bars and clubs, but the approach is the same when dealing with larger touring artists or Broadway shows.

As a quick run down of the type of deals that might be negotiated:

Guarantee – artist gets a guaranteed amount. A basic deal.

Guarantee Versus Percentage of Gross Deal (NBOR) – also known as a versus deal, artist gets the greater of a guarantee or a percentage of the Gross with only sales tax and perhaps facility and credit card fees subtracted.  (Example: $2000 Guarantee vs 65% of gross and the show makes $7500 after taxes, artist would take home $4875 instead of $2000). Obviously, you can also work out a deal where specific expenses are allowed to be deducted.

Guarantee Plus Percentage Deal – This one is a little more complicated. In this case, the artist fee and other production expenses are deducted before the negotiated percentage is applied. While Goyzueta does a good job of laying how to calculate this step by step, I wanted to provide a slightly more detailed visual example as an illustration.

A slight variation of this deals allows for promoter profit, typically 15% of the fixed and variable expenses. I have included that in the example below. This would be removed in a deal that doesn’t allow for that. 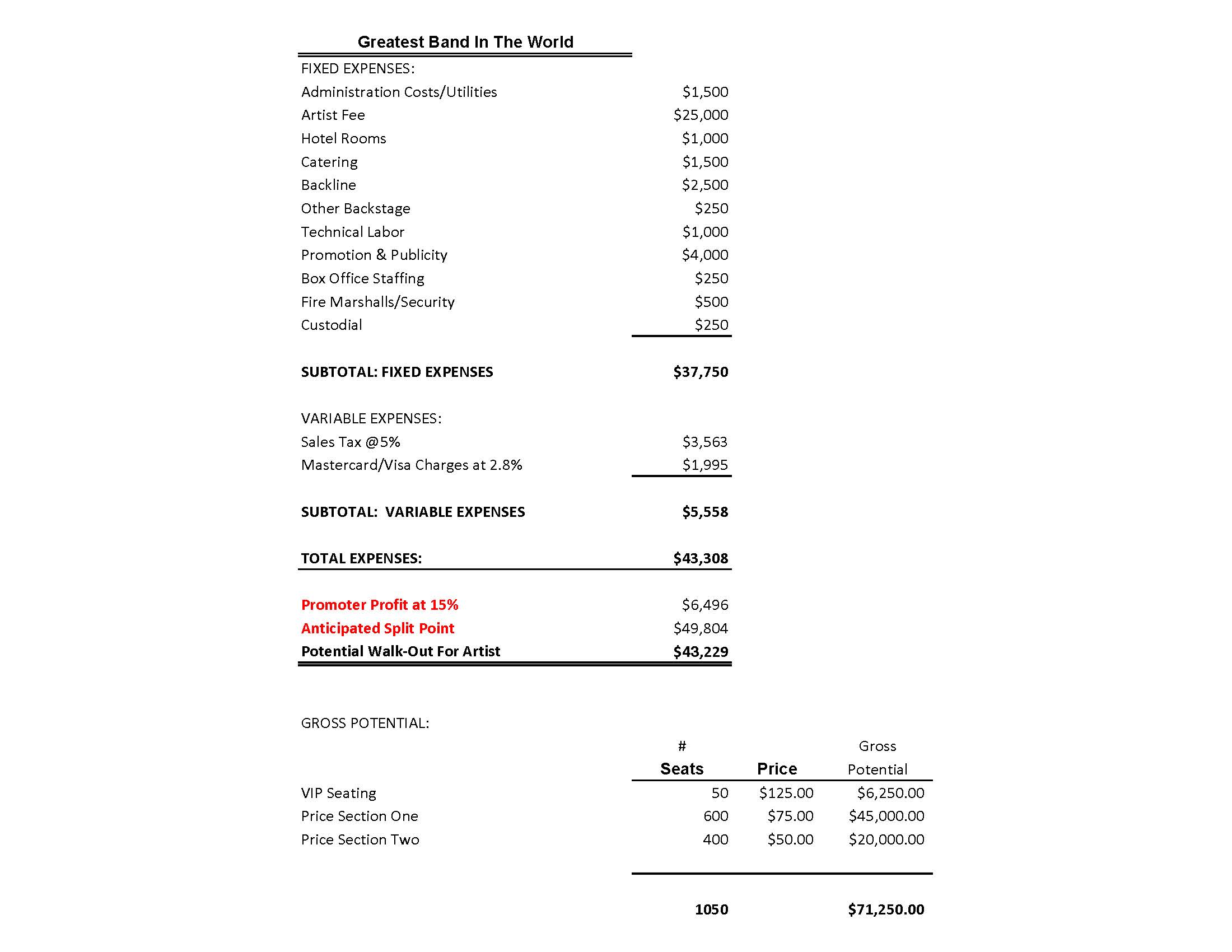 An important thing to note in this arrangement is the split point which is why I labeled it in red. That is the amount of revenue that needs to be reached before the artist begins to see any payment above the $25,000 guarantee. In this example, the potential gross if the show is sold out is $71,500.

The split point, including promoter profit, is 70% of the potential gross so the show has to reach about 70% capacity before the artist sees additional revenue. The artist and agent may feel this is a likely scenario and accept this arrangement.

One thing to remember though, is that if the promoter or artist has friends they want to let into the show for free, that will reduce the potential revenue. Giving away 20 seats @ $75 to friends and 8 seats in the VIP section for radio promotions takes $2500 out of the potential revenue right from the start which makes it more difficult to reach the split point.

It is important to factor those things into the initial gross revenue projections when structuring a deal. I left those calculations out of the example in order to prevent things from getting too confusing for those new to these arrangements.