Theatre Streams: Who Uses The Offer?

A a non-representative survey by Rainer Glaap, Germany

Bremen, April 26, 2020: The streaming offer of cultural institutions has massively increased with the beginning of the corona pandemic and the resulting closure of cultural institutions. The theatres, opera houses and concert halls are thus reacting to the closed buildings and would like to help their visitors to bridge the time without live performances.

Many offers, Many Questions

The offers are manifold. At the beginning of the crisis, some houses were still thinking about live streaming, which soon proved impossible. The assembly ban also applied to the actors on and behind the stages, not only to the audience. Instead, recordings of the most diverse provenance were offered: Recordings of dress rehearsals, premieres, TV recordings, e.g. for the Berlin Theatertreffen, film adaptations like the “Summer Guests” of the Berlin Schaubühne.

So the question arises as to how viewers perceive the cultural institutions’ offerings in pandemic times. Is there more interest[1]? How is consumption? Which offers are known at all? Is there a willingness to pay, especially to improve the currently desolate financial situation by eliminating entrance fees?

To answer some of these questions, I started a survey on Easter Saturday, April 11, 2020, to get to the bottom of things a bit. The survey is not representative and does not meet scientific standards. It was distributed via Facebook, Twitter and various e-mail distribution lists, partly private, partly public.

Who Makes Use Of The Offer?

91% of those surveyed described themselves as “regular” theatre-goers. Here it becomes clear that despite all the author’s efforts to reach out to the general population, a clear escalation to a certain “culture bubble” has taken place. For further consideration, however, this is still an advantage, as some of the findings are surprising, especially with this target group.

The age distribution is relatively even across the age groups, with a rather untypical 10.4% over 60. 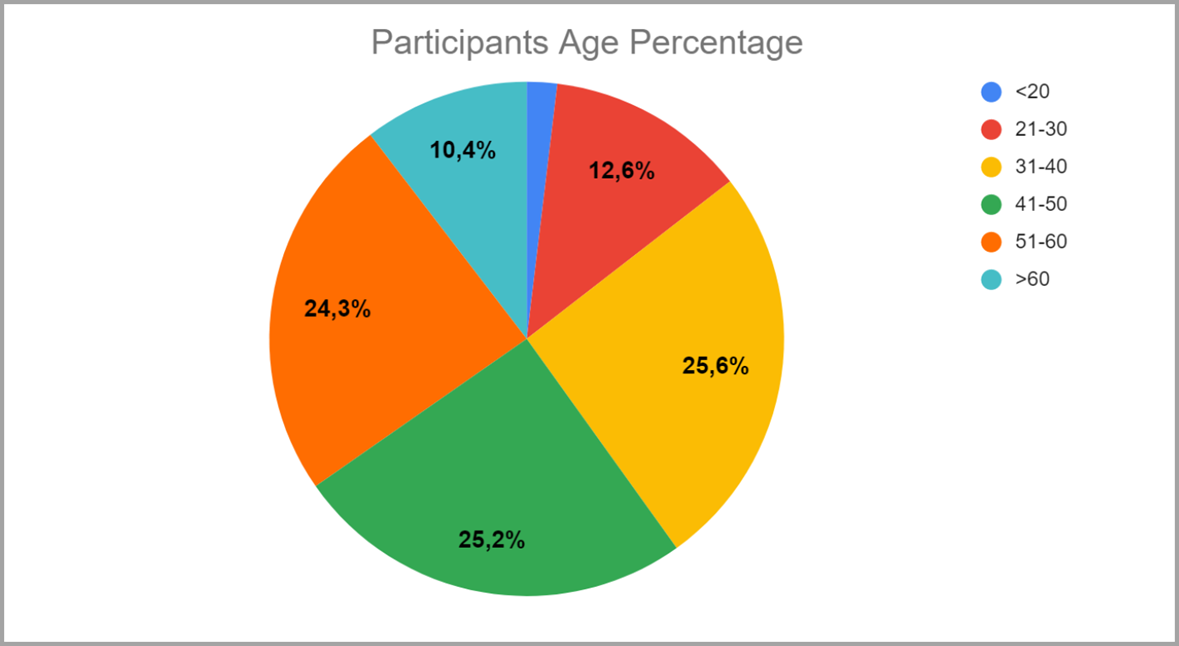 The gender distribution is also rather untypical for cultural visitors[2], namely almost the same, with 2.8% of respondents classifying themselves as diverse. The geographical distribution shows a focus on Berlin, Cologne and the north of Germany (note: the author lives in Bremen, where he certainly generated some answers among his own circle of acquaintances).

Which Offers Are Known?

When asked which streaming offers were known, the following picture emerged (multiple answers were possible): 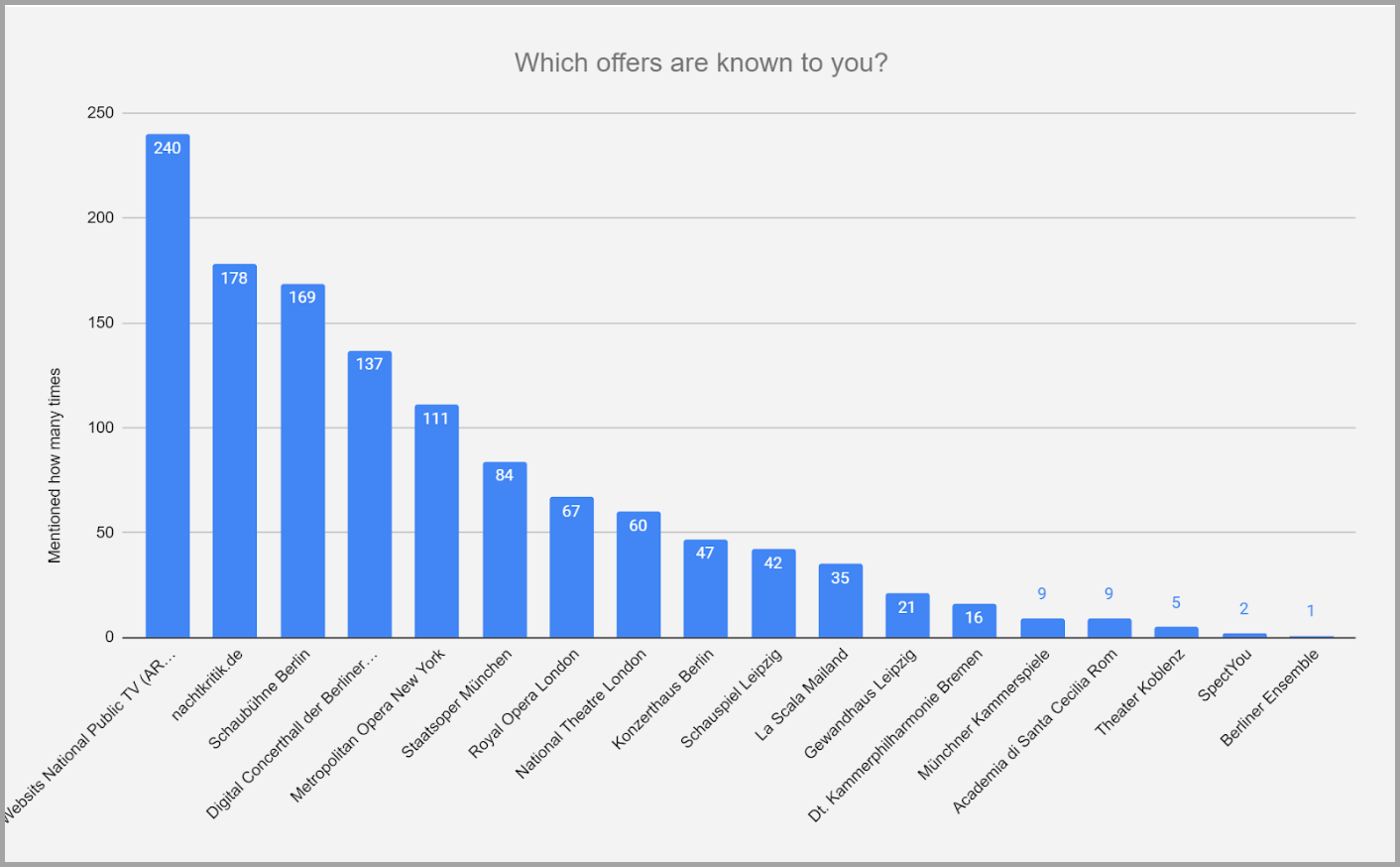 The best-known are the media libraries of public broadcasters, followed by nachtkritik.de with daily changing streams from various theatres and the offerings of the Berlin Schaubühne [3]. The offers from the USA and England are certainly known from the opera and theatre broadcasts that have been running in German cinemas for years.

In terms of genres, there is a clear preference for theatre performances in the broadest sense. Musicals and cabaret only interest individual respondents here. 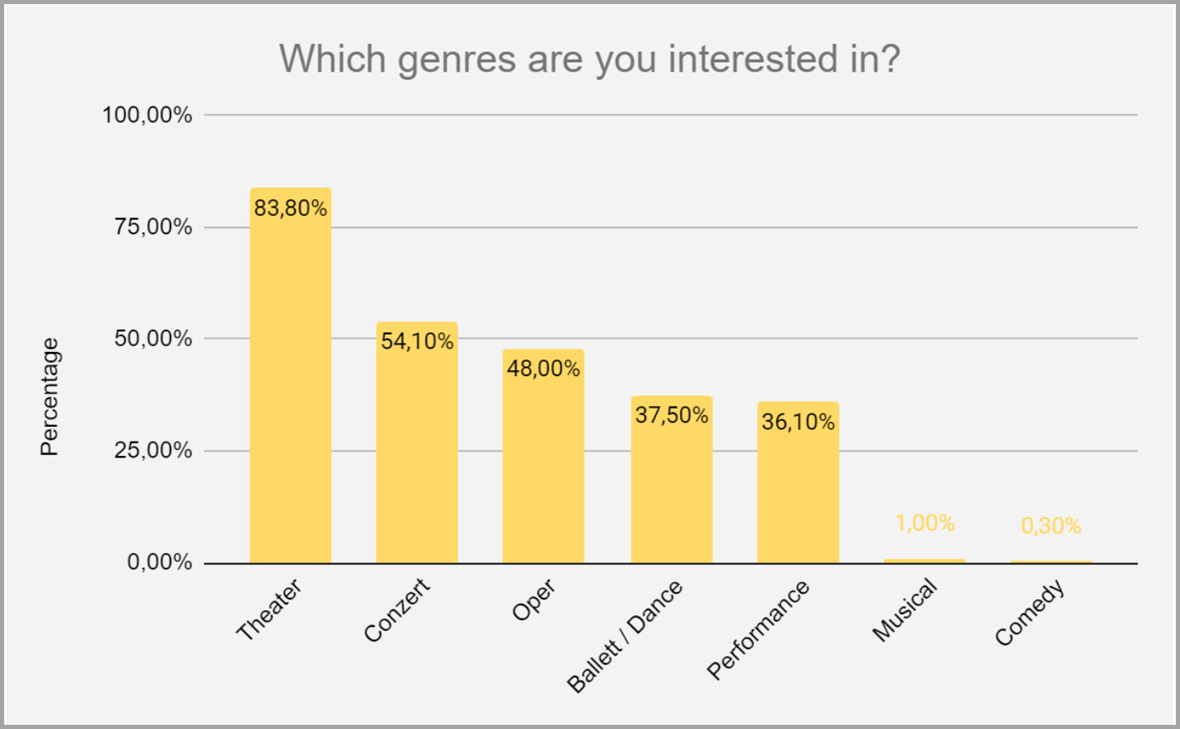 Of course, answers regarding the number of offers seen and the length of stay are particularly interesting. Of course, only those providers can give more precise numbers here who certainly have counting options via Vimeo, Youtube, SpectYou and other platforms, but have not yet published these numbers (at least none are known to the author). 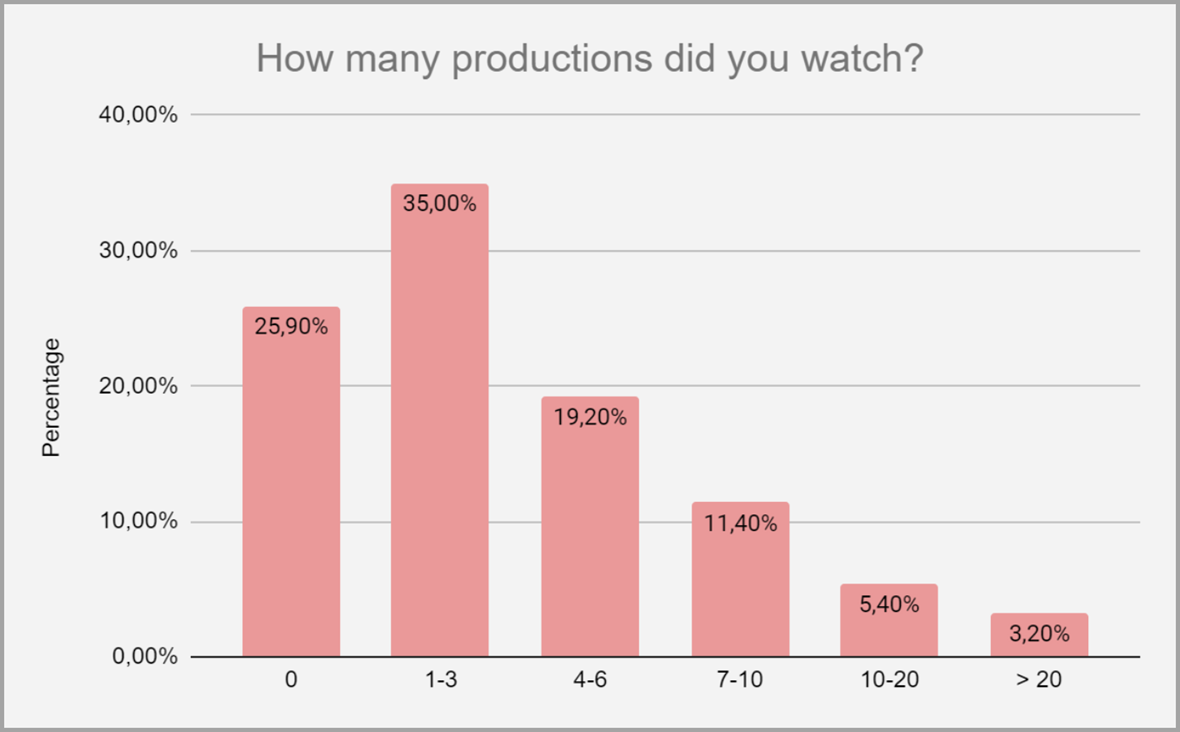 If one takes the two categories 1-3 and 4-6 together, 60.9% watched up to 6 productions, for some viewers (possibly dramaturges, curators and especially those interested in theatre) the current offers are very welcome, 10 and more productions have seen 8.6%.

If one takes the two categories 1-3 and 4-6 together, 60.9% watched up to 6 productions, for some viewers (possibly dramaturges, curators and especially those interested in theatre) the current offers are very welcome, 10 and more productions have seen 8.6%.

A big difference to visits to the facilities themselves is the length of stay. In the theater, one sits concentrated and looks at what is happening on stage. Thoughts may wander, one usually does not talk to one’s neighbour or use the so-called “second screen”, i.e. the smartphone (apart from inglorious exceptions). The above mentioned “Orestie” at the Schaubühne had a performance duration of 9 hours including breaks, a Wagner opera easily reaches 5 hours, a typical drama performance maybe 3 hours. The patience of many spectators cannot be strained that long on the internet. We know from attention research that concentration drops after only 20 minutes [4], as many home office workers may painfully report from their many video conferences.

So the question of how many productions one has watched from start to finish was answered in this way: 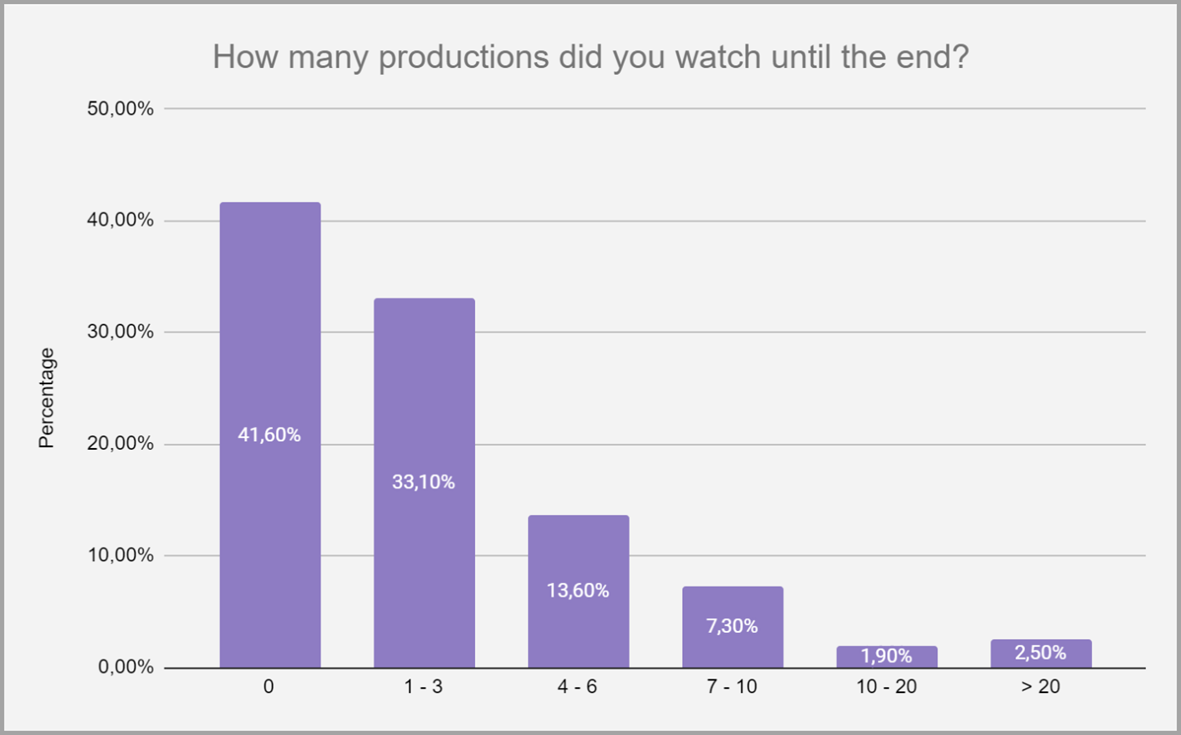 Almost half (41.6%) of the viewers did not watch a single production to the end, one third (33.1%) watched 1 – 3 productions. The reasons for this may be manifold, but would have gone beyond the scope of this survey. Possibly this is also a question of the technical end devices; there is a separate query on this below. However, the phenomenon seems to be widespread. At the final conference of Operavision[5], a platform of various European opera houses, at the end of the first funding period of 3 years by the EU, my question about the length of stay was answered by the fact that the majority of the audience had left one of the offered complete opera productions after 20 minutes.

Of particular importance in times of financial crisis is the question of payment. Only 53.2% of the respondents are willing to pay anything at all for streaming in the form of a contribution (no distinction was made here between one-off payments or subscriptions, as is possible for example with the Digital Concert Hall of the Berlin Philharmonic Orchestra [6] or takt1). Of those who are willing to pay for the offer, these figures were mentioned: 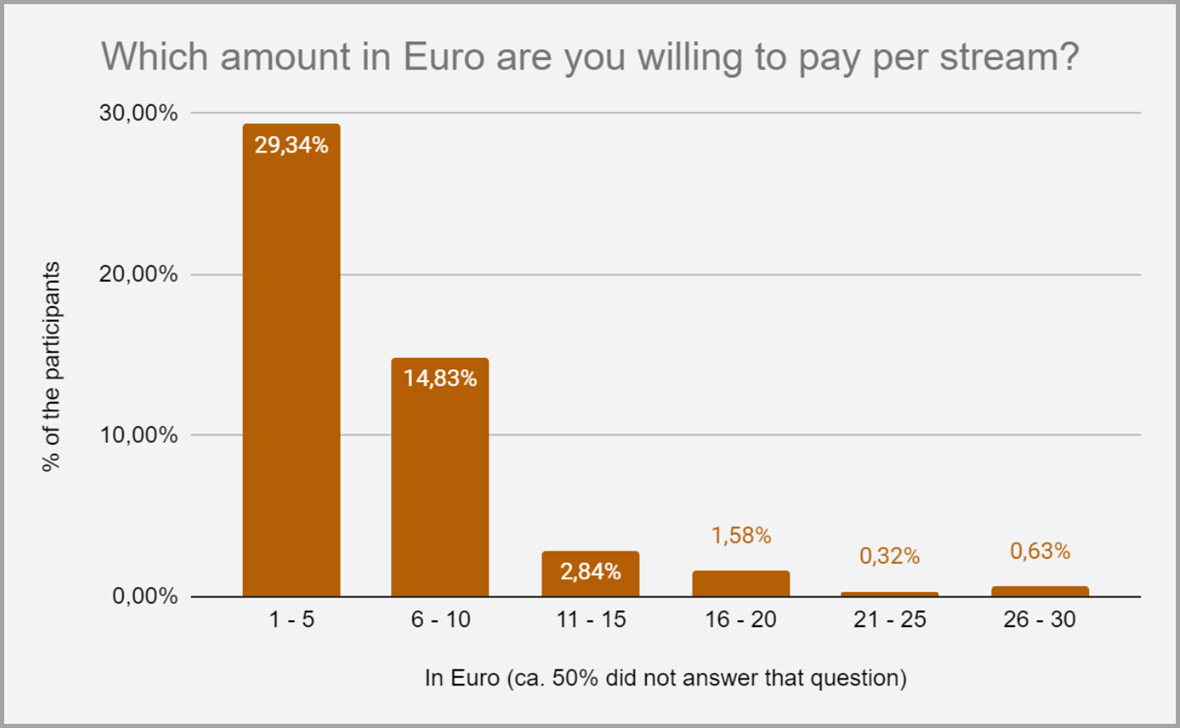 The willingness to pay a fee per stream is therefore relatively low, almost half of the respondents had already clearly signalled in the previous question that they did not want to pay anything. In absolute figures the most frequently mentioned amounts were 5 Euro (52 mentions and at the same time the median) and 10 Euro (32 mentions), on average 7.31 Euro (5€ ~ $5,42, €7,31 ~ $7,97, exchange rate on May 4th).

In this context, the question was also asked about the willingness to take up further streamed offers after the end of the pandemic and the assumed reopening of the houses. 50% of those questioned denied this.

Finally, a look at the end devices used. These may have a strong influence on the enjoyment of the performances. Only a quarter of the respondents watch the streams on smart TV [7], i.e. with assumed excellent picture and sound presentation. 75% use desktop and laptop with naturally different posture and quality. It is possible that more technical expertise in the households and/or more instructions, handouts or instructional videos would provide better connection and more enjoyment.

The use of digital offers in the form of live or on-demand streaming is only partially accepted, even by users with an affinity for the theatre. The willingness to pay per stream is between 5 and 10 Euros, with half of the users showing no willingness to pay at all. Streaming in its current form is not a substitute for the loss of admission fees. On the one hand, the length of stay is too short, on the other hand, technical circumstances may also speak against the full enjoyment of a theatre, opera or concert evening at home.

[1] Prof. Holger Noltze: “I have always blamed this marginalization of video streaming on a lack of habituation. We are so spoiled by the geographical density of our concert halls in Germany, by the offer of public channels, that we hardly feel compelled to access video streams. Source: https://www.faz.net/aktuell/feuilleton/buehne-und-konzert/holger-noltze-ueber-die-digitale-zukunft-klassischer-musik-16729728.html (19.4.2020)

[2] For example, a study by the Center for Audience Development (Berlin) in a study for the Staatstheater Braunschweig 2015 found that the proportion of female visitors to the Staatstheater Karlsruhe was 67.2%. 71.3% of visitors were 50 years and older.
Source: https://www.stiftung.staatstheater-braunschweig.de/media/StaatstheaterBraunschweig_BesucherbefragungErgebnisse_150504.pdf

[3]Thomas Ostermeier, director of the Schaubühne, had stated in a newspaper interview that up to 20,000 spectators could see individual offers. SOURCE: https://www.wz.de/kultur/theaterregisseur-ostermeier-wie-lange-wird-es-dauern_aid-49814983

[5] According to SocialBlade, Operavision had 25,303 video views worldwide on 20.4.2020. To what extent these figures reflect the actual number of views cannot be verified. https://socialblade.com/youtube/c/operavision

[6] The Digital Concerthall attracted new visitors at the beginning of the lockdown with a voucher for free use for 30 days. There are no public figures available about the success of this campaign.