Top 5 Reasons Why ‘The Customer Is Always Right’ Is Wrong

I have always believed in this phrase. This doesn’t mean I don’t strive to deliver the best customer service I can to each and every patron, but sometimes a patron becomes so toxic or argumentative, that breaking up with them is the best thing to do for your organization, and for the employees or volunteers who man the box office. I found this great article on Huffington Post that explains why the customer isn’t always right. Here’s a quick overview of the author’s top 5 reasons. 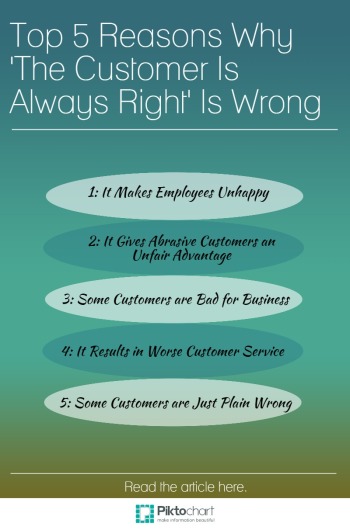 After reading this article, and watching the video, I really liked how he singled out customers who are ‘unreasonable’. This made me think back to examples of patrons that we have been happy to part ways with, due to unreasonable behavior or demands, abuse of box office personnel and policies, and how we ‘broke up’ with them in each instance: