Famous Movie Quotes On How NOT To Run An Organization

My family and I have full on conversations in movie quotes.  Casual listeners to our conversations would be lost amongst the A League of Our Own, High Society, and A Christmas Story dialogue streams.  I’m a movie fan, so Colleen Dilenschneider‘s 12/2/2015 post, Five Famous Movie Quotes On How NOT To Run A Nonprofit Organization, hit my newsfeed.

Dilen takes well-known and often used movie quotes from Field of Dreams, When Harry Met Sally, Jerry Maguire, Love Story, and A Few Good Men to offer tips on how not to run a nonprofit.

My particular favorite at this time, especially as my organization heads into 2016/17 season planning, is her advice from Field of Dreams:

Technically, the quote is “If you build it, he will come,” for you finicky quote folks – and it’s untrue. It’s especially untrue for visitor-serving organizations. If it were true, no newly constructed buildings would remain massively underused. Having free admission would be a cure-all for engagement (it’s not), and every new program or performance would be filled wall-to-wall with audience members and participants. Cultural organizations from museums to symphonies wouldn’t be experiencing declining attendance contrasted against burgeoning population growth…but they are.

Organizations often assume that anything they “build” is something that the market wants or needs – and that’s simply not the case.

Just because we create a beer and Bach concert series at hip, trendy bar, doesn’t mean that we’ll attract new audiences or those pesky Millenials and the Founders aren’t even of legal age yet.  Maybe they’ll come, maybe they won’t.  Is whatever we’re trying to build something that is truly beneficial and furthers the mission of our organization or are we wandering out in left field?

The article wouldn’t be complete without offering up my own quotes and opinions, so here’s two of my own:

There are two ways to apply Max’s quote to arts organizations. 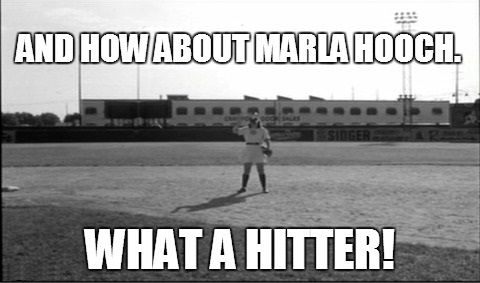 Poor Marla. Marla Hooch is a girl plucked from a farm life to play for the Rockford Peaches in the All American Girls Baseball League in the 1940s.  Marla isn’t the prettiest of girls and isn’t chosen for the team because of her looks.  Her father persuades the scout to take her.  By the end of the movie, Marla has had lessons in charm and beauty from her teammates, gets married, and is really a beautiful character.

The lesson here: A program or idea may not be the prettiest or shiniest or coolest by current standards, but often, it still has merit. It needs a champion to get it through whatever barriers there may be. Revising your General Ledger codes to streamline your accounting process isn’t at all shiny and there could be several challenges to it.  But, champion the cause and you can end up with a home run.

What movie quotes do you use that could relate to running a nonprofit or arts organization? I’d love to hear them @sgmarz or @artshacker or in the comments below.